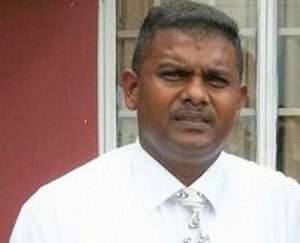 trinidadexpress.com- A police officer was found dead near a primary school this afternoon, shortly after he called his wife and said he loved her.

Constable Brendon Mohammed, a fingerprint expert working with the Criminal Records Office in Port of Spain, was found shot in the head.

A gun was found near his body.

A farmer walking along Robert Trace, Warrenville found the body around 12.30 p.m.

There was a single gunshot wound to the head.

The body was clad in the clothing that Mohammed was seen wearing when he left home to attend court – purple shirt, black dress pants and dress shoes.