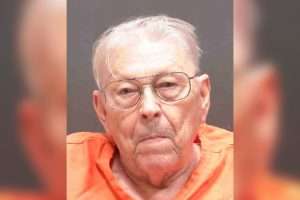 (NEW YORK POST) — A 94-year-old Florida man fatally shot his dementia-stricken wife and intended to turn the gun on himself — but the firearm malfunctioned, police said.

Wayne S. Juhlin, of Venice, called cops to report that he killed his 80-year-old wife at their residence late Monday after deciding to “end her life” since she was suffering from dementia, Venice police announced Tuesday.

Juhlin told detectives he had planned to kill himself after taking his wife’s life, but his gun wouldn’t fire again, “preventing him from carrying out the suicide portion of the event,” Venice police tweeted.

Juhlin has been charged with first-degree premeditated murder. He remains held without bail at the Sarasota County Jail, online records show.

Juhlin lived with his wife — whose identity has not been released — at an independent living facility, the Sarasota Herald-Tribune reports.

The number of Florida residents living with dementia — 540,000 — is second only to California and is expected to grow to 720,000 by 2025, according to Danielle Valery, director of the Memory Clinic at Sarasota Memorial Hospital.

“People who are not familiar with the dementia situation here are going to be in for a big shock by how much this is going to cost, with so many baby boomers aging out,” Valery told the newspaper.

Spouses who must cope with the “daily stress” of living with loved ones suffering from dementia often don’t seek the help they need, Valery said.

The director of caregiving services at another senior citizen center in Sarasota County said the circumstances facing some elderly residents can be “so incredibly sad,” the Herald-Tribune reports.

“So many caregivers watch people they’ve been married to for 50, 60 years lose their identities, and their ability to care for themselves, and they suffer from depression because making these difficult choices isn’t something we spend our lives talking about,” Paula Falk of the Venice Senior Friendship Center told the newspaper.