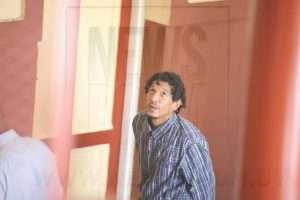 newsroom.gy- A Silver Hill, Soesdyke/Linden Highway man who was only recently released from jail, has now been charged with the October 7 murder of his four-year-old stepson; a post mortem showed the child was also sodomised.

The man, Joseph James, 21, made his second court appearance at the Georgetown Magistrate’s Court Thursday after he was charged with the murder of the little boy. He was remanded to prison until October 23 when the matter will be called at the Linden Magistrate’s Court.

The News Room had earlier reported that on October 7, 2019, James claimed to have “found” the child naked and unconscious.

The stepfather had initially told the Police that he left the child home to go to a nearby shop to buy food stuff to cook and when he returned home he found the child in that state.

Nurses from the health centre were called to the house and after realizing the situation, they called an ambulance from the Mckenzie Hospital in Linden. The child died before reaching the hospital.

However, the investigation took a turn when the autopsy showed that the child died as a result of head trauma and had been sodomized.

James was sentenced to 36 months in jail in 2016 for snatching a schoolgirl’s cellphone.