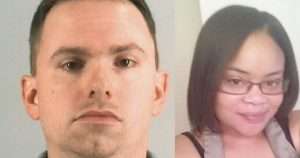 (SKY NEWS) — A white police officer who shot and killed a black woman in her own home has been charged with murder.

Aaron Dean was named by Fort Worth Police Department in Texas as the former officer who killed Atatiana Jefferson when police were responding to a call about her home.

Interim Police Chief Ed Kraus said that Dean had also quit before a planned meeting where Mr Kraus was going to sack him.

Dean shot Ms Jefferson through her window as she played video games with her eight-year-old nephew in the early hours of Saturday morning.

Officers had been responding to a neighbour’s concern that her front door was open.

Bodycam footage from the incident revealed Dean did not identify himself as police before he fired a shot.

The shooting happened two weeks after Amber Guyger was jailed for 10 years for fatally shooting Botham Jean. She had mistakenly entered his Dallas apartment and thought it was her own.

Ms Jefferson’s family called her a smart, nurturing woman, and said she had recently moved in with her mother to care for her.

One of her sisters, Ashley Carr, said the 28-year-old embodied honour, integrity, commitment and service.

Fort Worth police said an officer drew their weapon after perceiving a threat when they saw Ms Jefferson move inside her home.

In the video, officers can be seen searching the home with torches before one shouts: “Put your hands up, show me your hands.”

A shot is then fired.

Fort Worth Police Officers Association issued a statement calling for “a thorough and transparent investigation” into the shooting.

The bodycam footage was released soon after the incident, as well as two stills which showed a gun inside a bedroom. It is not clear if the officer thought Ms Jefferson was holding a gun.

Police said officers who entered the home found a firearm. The Mayor of Fort Worth called the gun “irrelevant”.

A large crowd gathered outside Ms Jefferson’s home on Sunday night for a vigil after earlier demonstrations stopped traffic on a nearby interstate.

Ms Jefferson graduated from Xavier University in New Orleans in 2014 and had a bachelor’s degree in biology.

Mr Merritt said she was working in pharmaceutical equipment sales and was considering going back to medical school.

Betsy Price, the Mayor of Fort Worth, said sorry to the family in a press conference, and also apologised to the neighbour who has been left “shaken” by Ms Jefferson’s death after he called in the welfare concern.

A demographic report from Fort Worth’s police department show nearly two-thirds of its 1,100 officers were white, 20% were Hispanic and 10% black.

Black or African Americans make up about 18% of the city’s population, while white people are about 64% according to the American Community Service. Hispanic and Latino make up about 34%.