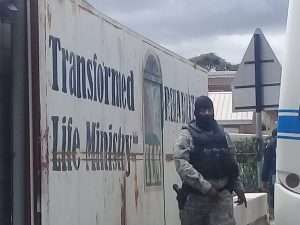 newsday.co.tt- THE fate of six workers of the Transformed Life Ministry rehabilitation centre in Arouca will hinge heavily on statements from patients who were reportedly kept in inhumane conditions and their relatives, as police continue their investigation.

One woman, who said her relative was placed there is now fully recovered. She said the “rescue” of about 90 people from the facility is no victory for the Commissioner of Police.

The woman from Tobago, who wished to remain anonymous, said TT is unable to properly deal with the rehabilitation of mentally ill people or those with substance-abuse issues.

“This is not a victory for Gary Griffith and his men. Mentally ill persons are being returned to family members who are unable to manage them. Most of them will be placed in other facilities less reputable than this one.”

The woman said while the facility was not up to modern standards, it provided a much-needed service.

“The place is run down and needs a facelift, but the cages are not unique to them. Every mental facility, including St Ann’s (hospital), has lockdown cells to keep violent inmates from harming themselves.”

She said the St Ann’s hospital, the only public psychiatric hospital in the country, is cramped, antiquated and oversubscribed.

“They only treat acute cases. When the manic or schizophrenic episode is passed, the patient is released to family members unable to manage them.”

She said many people are afraid to deal with relatives with mental health issues.

“Too many families live in fear of being attacked by a violent family member on drugs or mentally ill; too many older people are at the mercy of unwell but strong sons and daughters; too many families live in fear of addicts that will sell everything including their own children for a fix. So this place is one of several facilities in the country that quietly provide rehabilitation services for people.”

“I hope the truth comes out after we get past the media misrepresentation that is feeding the frenzy. Our country loves to put bandages on sores. We are really bad at caring for the vulnerable – especially children, the disabled, the elderly and the mentally ill, the environment and animals.

One man, who identified himself only as Asad, said he works at the centre. He denied that patients at the facility were enslaved or being trafficked and challenged the authorities to present the evidence for making such statements.

He justified keeping people in cages, saying some of them would become violent towards staff when detoxing from drugs and alcohol.

“This isn’t some fly-by-night institution. It has its credentials and has helped a lot of people in the past. People might see cages, but you have to have an environment like that to contain the people with mental illnesses.

“I want to know which human inside of there was trafficked and what time it happened? They defamed a man’s character already. These people’s relatives are paying a lot of hard-earned money to keep them here.”

Asad said the facility was open 24/7 and the pastor in charge would often spend the night.

One woman who claimed she was a former client, said there were no human rights violations and claimed the pastor helped her overcome her mental health issues.

“It’s unfortunate because he (the pastor) really helps people. A lot of people come in here looking frail and hopeless and are really transformed by his teachings and his care.”