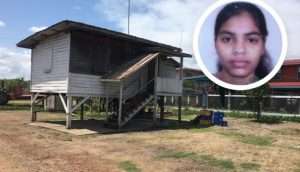 (NEWS ROOM GUYANA) — A 29-year-old man is now dead after he beat and forced the mother of his two children to consume a poisonous substance.

Amar Jeffery, a labourer of Mibicuri Black Bush Polder allegedly took his life after he tried to get his wife, 30-year-old Sherry Satnarine to return home.

The incident occurred on Tuesday morning – a few houses away from the couple’s home.

The News Room understands that the woman moved out of the house to Johanna village next door after enduring years of physical abuse at the hands of Amar, however, on Monday evening, he took her from Johanna and beat her until they reached home in Mibicuri.

Residents overheard Amar threatening to kill the woman and end his life. Fearful for her safety, Sherry stayed at a neighbour’s house Monday night with her two children, ages 4 and 6.

On Tuesday morning, Sherry left for the Mibicuri Police Station to make a report but he followed her.

Upon her return, Sherry decided to go to her mother’s house but Amar begged her not to go. It is alleged that he ran to the back of the neighbour’s house where he grabbed the poisonous substance and consumed it.

He then grabbed to his wife, threw her to the ground and force her to swallow the poison as well.

The labourer was rushed to the Mibicuri Hospital where he died a few hours later; Sherry remains in a stable condition at the same hospital.

Facebook
Twitter
Pinterest
WhatsApp
Previous articleRihanna Says She Turned Down Super Bowl Because Of Colin Kaepernick: ‘I Couldn’t Be A Sellout’
Next articleJamaica: Man Said He Was Attacked By Ghost After He Cheated On His Wife

Trinidad And Tobago Rattled By Earthquake