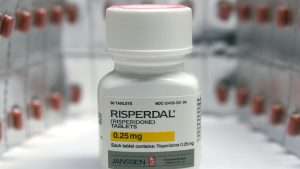 (BBC) — US drug firm Johnson & Johnson has been told to pay $8bn (£6.6bn) in punitive damages to a man over claims he was not warned that an anti-psychotic drug could lead to breast growth.

A Philadelphia jury made the award to Nicholas Murray, 26, whose case was one of thousands pending in the state.

J&J will appeal the ruling, which it said was “grossly disproportionate”.

Professor Carl Tobias of the University of Richmond School of Law said he expected the large damages award to be lowered on appeal.

“A jury, if it’s outrageous enough conduct, will award a big number and let the lawyers and judges work it out,” he said.

However, Prof Tobias said the jury’s verdict could mean the firm faces more large damages awards in other Risperdal cases.

“The kind of evidence in this trial may persuade another jury or judge to do something similar,” he said.

The company is facing a series of complaints in the US for allegedly failing to properly warn of Risperdal’s side effects.

The US giant is also facing court challenges over vaginal mesh implants and baby powder allegedly tainted with asbestos. Those cases are in addition to an ongoing legal battle over its role in the US opioid addiction crisis.

In August, Johnson & Johnson was ordered to pay $572m after a judge in Oklahoma ruled that the company contributed to an opioid epidemic in the state by running a “false and dangerous” sales campaign. The firm said it will appeal.

More recently, it agreed a $20.4m settlement with two counties in Ohio ahead of a trial about the opioid crisis, scheduled to take place later this month.

In the Risperdal lawsuit, Mr Murray said he developed breasts after his doctors prescribed the drug in 2003 when they diagnosed him with autism spectrum disorder.

Risperdal is approved for the treatment of schizophrenia and bipolar disorder, but doctors can legally prescribe medicine for any condition they see fit.

The company said it is confident the ruling will be overturned, and said the court prevented their legal team from presenting “key evidence” on the drug’s labelling.

A jury in 2015 awarded Mr Murray $1.75m after finding the company was negligent in failing to warn consumers of the risks.

A state appeals court upheld the verdict in last year, but reduced it to $680,000.