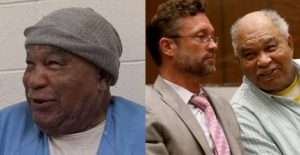 (THE DAILY STAR-UK) — The worst serial killer in American history has been filmed laughing as he casually described murdering one of his 93 victims.

His murders went undetected for nearly half a century until Texas ranger James Holland developed a hunch about his guilt.

He built up a rapport with the mass murderer who, eventually, confessed to the killings.

Little’s chilling confessions were caught on camera and featured on US show 60 Minutes, having been released by the FBI. on Sunday.

“(She) had buck teeth,” he says in the video, fighting back laughter.

“Had a gap between her teeth, that’s what it was.”

Little then breaks into a grin before adding: “She’s fighting for her life and I’m fighting for my pleasure.”

His DNA was then linked tot he unsolved 1994 murder of Texas woman Denise Christie Brothers – a killing he was charged with in July 2018.

He initially pleaded innocent but then met Mr Holland – and went on to reveal his killing spree.

Federal crime analysts believe all of his confessions are credible and the FBI released the videos on Sunday in the hope of identifying some of his victims.

Sketches drawn by Little of people he claims to have murdered have also been released.

Many of the murders that he has confessed to bear similarities to those of Carol Alford, 41, Audrey Nelson, 35, and Guadalupe Apodaca, 46 — the three women he was originally convicted of killing and sentenced to three terms of life with no parole.

The killer hit, strangled and masturbated over his victims before dumping their bodies in alleyways and abandoned garages.

His latest confessions have already helped close previously unsolved murders in Georgia and Louisiana having provided details “that only the murderer would have known”.