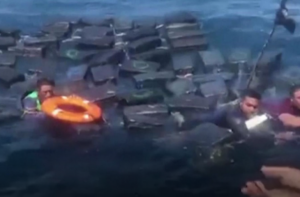 (SKY NEWS) — Three suspected drug smugglers had to be rescued after they were found floating on 1.2 tonnes of cocaine off Colombia’s coast.

The trio’s boat had sunk in the high seas of the Pacific Ocean, forcing them to use their cocaine packs as floaties.

They were found by Colombian army officers some 30 miles off the coast of Tumaco clinging to their cargo.

Footage of the rescue shows the men surrounded by black boxes, which were later confirmed to contain 1,265kg of cocaine hydrochloride.

They were thrown life preservers by their rescuers and helped onto a boat.

The men had been stranded at sea for at least three hours when they were picked up by the Tumaco Coast Guard Unit in the area.

They have since been charged with drug trafficking and manufacturing narcotics.