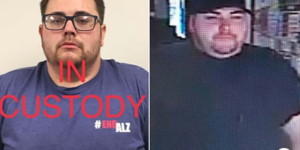 (NEW YORK POST) — A Texas man’s walk down the aisle took a wrong turn when he decided to rob a bank the day before his wedding so he could pay for his fiancee’s ring — and she saw surveillance images of him posted by police, according to a report.

Instead of exchanging vows, Heath Edward Bumpous of Crockett was charged with aggravated robbery for allegedly informing a teller at Citizens State Bank in Groveton that he had a gun and demanding that she fork over cash, KLTV reported.

“He basically stated that he was getting married tomorrow so he didn’t have enough money for a wedding ring that he wanted to buy and he needed to pay for the wedding venue,” Trinity County Sheriff Woody Wallace said.

After the Friday morning heist, Bumpous threw his clothing out of his car as he sped away, said Wallace, who posted pictures of the suspect on his department’s Facebook page in hopes of getting tips from the public.

For better or for worse, his fiancée saw the post and immediately recognized her future hubby.

“His fiancée, who he was supposed to marry tomorrow, was able to get in touch with him on the phone when she saw our post on Facebook. She knew it was him. She contacted him and asked him if he robbed a bank … she convinced him that she knew it was him,” Wallace said in a video posted to his Facebook page.

“His picture was all on Facebook. He needed to turn himself in,” he added.

Bumpous turned himself in at the Houston County Courthouse and most of the stolen money has been recovered, along with the clothes and the gun, the sheriff said, adding that the former EMS worker has confessed to the crime.

“He is now in custody. He has been charged with aggravated robbery. The district attorney has accepted the charges. It will go to a grand jury and he will be prosecuted to the full extent of the law,” Wallace added.

It was unclear if and when the couple will tie the knot.