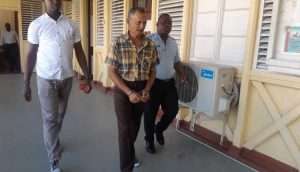 newsroom.gy- Terrence Madray, called Throw back, was on Monday sentenced to 21 years imprisonment for killing his 76-year-old bedridden mother at their Good Faith, Mahaicony home in 2016.

Madray appeared before Justice Jo-Ann Barlow at the Demerara High Court for murder but opted to plea to the lesser court of murder.

He confessed that on between April 18,2016 and April 21,2016 at Good Faith, Mahaicony, he unlawfully killed his mother Cecelia Madray, also known as Suzy.

According to the State’s case, the defendant was the caretaker of his mother and they lived together at Good Faith, Mahaicony.  The elderly woman was bedridden due to her being involved in an accident.

On April 18, 2019, Terrence lashed his bedridden mother to her head with a piece of wood which caused her to pass out. He tried to revive her with water, give her a bath, and tried feeding her but she was still unconscious. He changed her pampers and put her on a piece of cardboard to sleep.

On April 18, 2016, a witness, who was visiting the Madray’s home heard Terrence using a series of expletives at his mother.

Terrence went upstairs to his mother while the witness was downstairs under the house.

The witness, in their statement, said they heard tramping upstairs followed by a loud groaning noise from the elderly woman. The woman was found wrapped up in a netting on her bed.

Prosecutor Martin told the court that Terrence had brought a bottle of rum and some weed, which he drank and smoked.

He claimed that he was intoxicated on the day in question and his mother told him “something” which caused him to hit her in the head.

It was due to an anonymous phone call received at the Mahaicony Police Station that a police officer went to the Madray’s home.

On April 21, 2019, when the officer visited the home the elderly woman was discovered motionless with blood in her ear.

Meanwhile, Terrence was outside sitting on the step to his home.  When the officer questioned him about his mother, he replied, “She okay, she sleeping.”

Terrence was arrested and taken back to the police station where he confessed on April 22, 2019, to killing his mother.

Attorney-at-law Conway, in mitigation asked the court to consider that although it was a senseless killing his client showed remorse by rendering assistance to her.

Conway explained that his client attends church service while imprisoned and does maintenance work at the prison.

“I really love my mom… is one lil incident,” Terrence told the court as he explained that he was under the influence of alcohol when he killed his mother.

However, the Judge told the defendant not to blame the drug and alcohol for his actions.

Terrence was sentenced to 21 years imprisonment and was ordered to attend anger management classes along with alcohol and drug abuse classes.

The prison authorities will have to deduct the time the convict spent on remand since 2016 from his sentence.