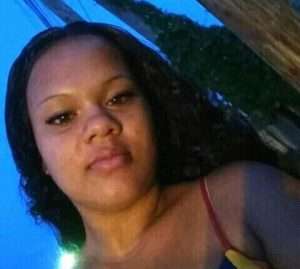 newsroom.gy- A 24-year-old woman, Alicia Henry, was shot in her back while she slept with her baby and husband at her side at their Front Road, West La Penitence, Georgetown home early Monday morning.

The victim’s mother-in-law, Vanessa Williams, told the News Room that she received a phone call in the wee hours of Monday that her daughter- in-law had been shot.

Williams said she immediately rushed to the Georgetown Public Hospital, but did not see Henry as she was already in surgery.

The News Room understands that men on motorcycles rode by at around 02:20 hrs Monday and shot at the house.

“When I come here where she living, I find out that some boys drive past with some bike and shoot; I can’t tell is who,” Williams said.

A bullet passed through the front wall in the one-bedroom house and hit Henry in her back. The woman’s 11-month-old baby and husband, 27-year-old Kevin Carter, were sleeping on the same bed but escaped injury.

The bullet entered the house at the side where the baby girl was lying, but the mother had shortly before moved her to the other side to breastfeed her.

“She say she just pull the baby to nurse her, so the baby [would’ve been] shot and not her,” Williams related.

The mother-in-law said Henry grew up in the neighbourhood and she could not say what may have caused the shooting.

The Police have not yet issued an official statement about the incident.