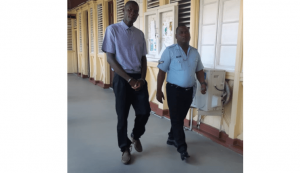 newsroom.gy- A former MMC Security guard on Monday confessed to the fatal shooting of his colleague during a heated exchange over claims that his co-workers were making fun of his daughter.

Kevin Stephens, formerly of La Penitence, Georgetown, appeared before Justice Jo-Ann Barlow at the Demerara High Court on the charge of murder. However, he opted to plea guilty to the lesser count of manslaughter.

Stephens confessed that on September 17, 2016, at Happy Acres, East Coast Demerara, he unlawfully killed Hubert Verwayne, a driver of the same security firm.

Verwayne was a father of four and resided at 710 Block 8, Tuschen, East Bank Essequibo.

Attorney-at-law George Thomas represents Stephens and requested that a probation report be prepared for his client before sentencing.

According to reports, on the day in question, Verwayne was in the company of several other employees when Stephens, armed with a shotgun, approached in a rage, accusing him, Verwayne, and others of making ill remarks about his daughter. He then opened fire, killing Verwayne.

Another of Stephens’ colleague had received shotgun wounds to his left hand during the incident.