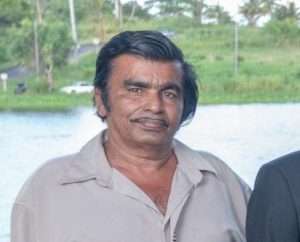 trinidadexpress.com- THE vehicle stolen from Azard Ali after he was killed in his Princes Town home was discovered by police being driven around on the other side of the country.

Officers of the Stolen Vehicles Unit (SVU) of Port of Spain tracked the vehicle and around 5 p.m. they cornered the two men in the car at Caroni South Bank Road near the St Helena Junction.

Officers detained one of the men, while the second man eluded capture and ran off and escaped.

The suspect, a 32 year old man of St Helena, was taken into police custody and kept at a station in Port of Spain.

He is expected to be handed over to officers of Homicide Region III who are investigating Ali’s killing.

The vehicle was towed to the Special Evidence Recovery Unit of the TTPS where crime scene investigators will search for fingerprints and other evidence to solve the homicide.

Ali, 60, suffocated on a piece of cloth with which he was gagged when he was attacked in his home at Mandingo Road last weekend.

Ali was gagged with the cloth, hog-tied and left to die inside his home.

The autopsy stated that death was due to obstruction of the airways caused by a foreign object.

His body was discovered by relatives after neighbours complained of a stench coming from the house on Monday.

Police said his Nissan Sylphy, license number PDU 8356, was missing from the garage.

Ali had retired as a Supervisor III with the Works and Transport Ministry in April.

He lived alone and relatives said he was robbed several times in recent months but he was never injured.