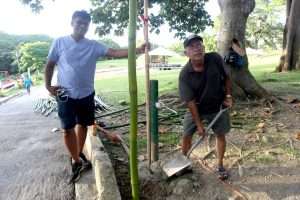 newsday.co.tt- A Princes Town mother of four was taken to the San Fernando General Hospital after she allegedly drank a poisonous substance while visiting Palmiste Park in San Fernando with her children yesterday.An eyewitness said the woman was sitting under the swings at the park while her children, ages 12, 10, four and two, played nearby. She allegedly called out to a plumber who was doing work at a nearby shed in preparation for Ramleela celebrations at the park.The eyewitness said, the plumber ran up the hill to find out what was wrong and immediately called the rest of the workmen who ran to help the woman while other workers called the police.The police and her husband arrived and took the children, and she was taken to the hospital in an unconscious state.

Churkoo village mandir pundit, Artma Maharaj, who was at the site, said society is “falling apart” as a person could attempt suicide while surrounded by people in a public place.“Religion is not only about being passive or verbal, it is about being active on the ground. So when people go through their dark moments, it is then we need to see how we can assist.

“It is not what we could have done, but what we are doing now. Society is really falling apart, it is a sad thing.”