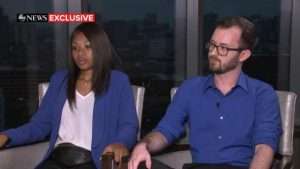 ABC NEWS– Two of the people who sat on the jury that sentenced former Dallas police officer Amber Guyger to a decade behind bars for killing an innocent man in his own home tell ABC News that coming to that decision was “one of the hardest things” they’ve ever had to do.

Guyger, 31, faced a prison sentence of five to 99 years after the jury rejected her self-defense claims and convicted her of murder on Tuesday for the fatal shooting of Botham Jean, a 26-year-old man she shot and killed on Sept. 6, 2018, when she mistakenly entered his apartment believing it was her own. Jean’s family described him as a man of faith who was kind, honest and hard-working.

Dallas County Assistant District Attorney LaQuita Long suggested to the jury that the sentence should not be lower than 28 years, noting that Jean would have turned 28 last month.

In an interview airing Friday on “Good Morning America,” Juror 21 and 34, as identified by the court, revealed how they came to decide Guyger’s fate.

“There was a few of us crying, and I really started crying, and I was listening to some people say they agreed with 28,” Juror 21 said. “I asked for a lighter sentence.”

Guyger’s defense attorneys argued she didn’t kill Jean out of hate but rather she made a series of “horrible mistakes” that caused her to “pull that trigger in an instant, an instant she’ll have to live with the rest of her life.”

Guyger testified that on the night of the shooting, she was tired from a long day at work and mistakenly parked on the wrong floor of her Dallas apartment building. She was still wearing her police uniform when she fired two shots at Jean, who was eating ice cream in his unlocked apartment.

Guyger, who was fired from the Dallas Police Department weeks after the shooting, testified that she was “scared to death” because she thought Jean was an intruder.

“I’m so sorry,” Guyger said as she wept on the stand. “I never wanted to take an innocent person’s life.”

“I wish he was the one with the gun that killed me,” she added.

After deliberating for a little over an hour Wednesday, the 12-member panel unanimously agreed to sentence Guyger to serve 10 years in prison.

“I think that was one of the hardest things I’ve ever had to do,” Juror 34 told ABC News.

The jurors said that Jean was at the heart of their decision, but they also had to consider Guyger’s show of remorse and the fact that the shooting was a mistake.

“I don’t think Botham would want to take harsh vengeance,” Juror 21 said. “I didn’t feel like I had any right to speak for him, and he isn’t there to talk for himself, but listening to how people talked about him, I felt like he would forgive her.”

Following the sentencing, Jean’s younger brother took the witness stand and spoke directly to Guyger, saying he forgives her and doesn’t even want her to go to jail. The 18-year-old then asked the judge if he could hug her. Many in the courtroom, including the judge, were brought to tears as the two embraced.

Outside the courtroom, protesters decried Guyger’s sentencing as too lenient.

“No matter how many years we would have gave Amber Guyger, it’s not bringing Botham back,” Juror 34 told ABC News. “It was a mistake, and the 10 years will be enough time for her to get back out there and try to do something better with her life.”