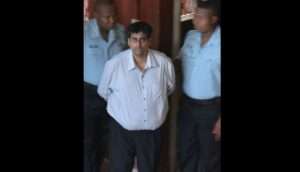 newsroom.gy- A 35-year-old Trinidadian national who was arrested in Guyana for faking his own kidnapping and demanding US$700,000 from his family, was on Friday sentenced to four years imprisonment.

Sawak Maraj was before City Magistrate Fabayo Azore for giving the Police wrong information and conspiracy to commit a felony. He was found guilty of both offences Friday.

The court heard that on October 27, 2017, at Georgetown, Maraj knowingly gave false information to the Police alleging that he was kidnapped and his abductors demanded US$700,000 for his release.

On the same day at Madewini Resort on the Linden/Soesdyke Highway where Maraj was found, he conspired with other persons to negotiate for the ransom to be paid.

He was represented by Attorneys-at-law Paula and Brandon DaSantos.

According to reports, Maraj arrived in Guyana on the morning of October 27, 2017, on a Caribbean Airlines Flight, allegedly to attend an interview for potential employment. It was noted that a booking was made for him at the Ramada Princess Hotel on the East Bank of Demerara but he never checked in there.

Relatives of Maraj were later contacted by unknown persons via phone who indicated that their son was in custody in Guyana and demanded a sum of money for his release. The relatives then contacted the Guyana Police Force who launched an investigation.

It was found that Maraj colluded with two other Trinidadian Nationals who arrived in Guyana on October 25, 2017, and checked in at the Madewini Resort.

The men were identified as Anil Antonio Mahabir and Vejhy Ramdass, both of whom the Police released wanted bulletins for on October 30, 2017.

The taxi driver who transported the men from the airport told detectives that when he was hired by Mahabir and Ramdass, they requested to be taken to that location. Once there, the taxi driver and the men exchanged telephone numbers.

The Trinidadians told the taxi driver that they had another colleague who would be arriving in the country and they provided him with details.

Once Maraj arrived, he joined the taxi willingly, having been briefed by his fellow countrymen; he was taken straight to the Madewini resort where he joined them.

The police managed to crack the case after reviewing CCTV footage from the airport and acquiring the license plate of the taxi driver who willingly cooperated with the police.