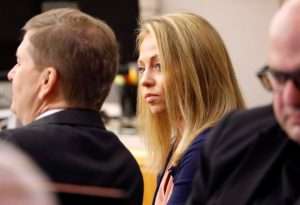 BBC-A US former police officer who shot dead her neighbour inside his own apartment in Dallas has been sentenced to 10 years in prison for murder.

Amber Guyger, 31, argued she killed Botham Jean, 26, after mistakenly thinking she was in her own flat and that he was an intruder.

During a tense seven-day trial, Guyger admitted she shot “an innocent man”.

Prosecutors accused her of bursting into Jean’s apartment and firing at him while he was sitting on his sofa.

Jean, a native of the Caribbean island of St Lucia, worked as an accountant at financial services firm Pricewaterhouse Coopers (PwC) at the time of his death.

In an emotional testimony, Jean’s brother Brandt said he “loved [Guyger] as a person” before giving her a hug.

Guyger, who served in the police force for four years, did not testify in the sentencing hearing, which included emotional testimony from Jean’s relatives and friends. His father, Bertrum, cried as he described the pain following the murder.

“How could we lose Botham – such a sweet boy? He tried his best to live a good honest life. He loved God. He loved everyone,” he told the jury.

Following the announcement of the sentence, Brandt said he wanted to speak directly to Guyger, and told her: “If you truly are sorry, I know I can speak for myself, I forgive you.”

He added: “I don’t even want you to go to jail… I love you as a person. I don’t wish anything bad on you”. After being allowed to hug her, they held each other in a long embrace.

The sentence, reached after an hour of deliberation, was decided by the same 12-member jury that had also found her guilty. She faced up to 99 years in prison.

What happened during the trial?

Guyger’s lawyers had argued she was distracted by sexually suggestive texts with another police officer and had just completed a nearly 14 hour shift when she made “a series of horrible mistakes” on the night of 6 September 2018.

Prosecutors accused her of entering Jean’s apartment “commando-style” and shooting at him while he was eating a bowl of ice cream on his sofa.

Guyger had testified that she found the door unlocked, and noticed it open slightly when she pushed her key into what she said she thought was her apartment – but was actually an apartment one floor directly above hers.

Assistant District Attorney Jason Fine called her testimony “garbage” and said her actions were “not a mistake”.

But the Texas Ranger who led the investigation testified it was common for residents at the complex where both Jean and Guyger lived to accidentally attempt to enter the wrong flat due to the building’s design.

Prosecutors said the off-duty police officer failed to recognise signs, such as Jean’s distinctive red door mat, that she was standing outside the wrong flat.