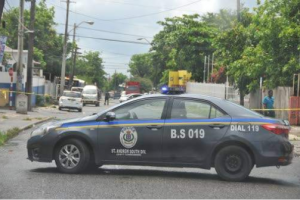 jamaicaobserver.com- A 37-year-old father, Oral Grey, was yesterday morning shot dead as he walked back to his motor vehicle just minutes after escorting his daughter into the Care Bear Early Childhood Development School in St Andrew Southern.

The brazen murder, committed yesterday morning about 9:00 when a number of children were being dropped off at the school on Waltham Park Road, sent parents and their little ones, who were frightened by the loud explosions, scampering for cover.

When the Jamaica Observer visited the institution yesterday, a school official said that the child had been attending the preschool for more than two years and that her father would drop her off and pick her up every day.

While the Observer was at the institution a concerned guardian, who had heard about the fatal shooting, came to pick up a student but was told by an official that classes had not been suspended.

When the news team visited West Avenue in Greenwich Farm, where the deceased lived, residents who had gathered remarked among themselves about Grey’s death.

Metres away on West Avenue at Grey’s home, his spouse, 23-year-old Sherekia Hall, said she was expecting their second child.

Admitting that getting their child ready and taking her to school was their daily routine, Hall said she had not been feeling well and had opted to remain at home while Grey dropped the child at school.

She said she was instructed to call Grey’s cellular phone, which she did. But it was not the voice she was expecting to hear on the other end.

“A policeman answered and said, ‘Hello, good morning. Yes mi have his phone. Him just die, such and such’. Mi nuh tek nuh taxi, mi run go up there and when mi go up there me see him on the ground,” Hall continued.

According to recent crime data, St Andrew South has recorded 166 murders, while St James and Clarendon recorded 108 and 102, respectively. St Catherine South, meanwhile, is responsible for 100 of the 976 murders recorded since the start of the year.

Five hundred and five illegal guns and 12,000 rounds of ammunition were seized by the security forces since the start of the year.

One resident from Nelson Road in St Andrew South called on the Government to implement a serious crime plan.

The resident, who spoke on condition of anonymity, made the plea against the background of Grey’s murder.

Lamenting that the security measures currently in place were not sufficient to combat the murder problem that the country is grappling with, the woman said: “The state of emergency is not working. This thing (crime) here is really serious. We need a crime plan.”

The woman told the Observer that a man had been shot dead Monday evening while several residents were left scampering for safety when explosions were heard in the community Saturday night.

“Shot a fire [shots] a di top of Alexander Road and police at the bottom. It nuh make sense police deh a di bottom,” she said.

“People a dead. Dem a use crime inna a politics and it is not working. If the two parties did come together, mi feel seh it would work,” she added.

Meanwhile, a release from the constabulary’s Corporate Communication Unit, detectives assigned to the Hunts Bay Police Station are investigating the circumstances surrounding the death of 24-year-old Shavan Smith of Walkers Crescent, Kingston 13, who was shot and killed on Waltham Park Road, Kingston 11, on Monday.

It was reported that Smith was at a friend’s house about 2:15 pm when he was pounced upon by unknown assailant(s) who opened gunfire, shooting him several times.

The police were summoned, and they assisted Smith to the hospital where he was pronounced dead.