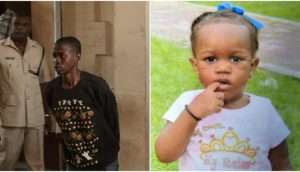 newsroom.gy- Sherwin Roberts known as ‘Big Head’ was sentenced to life imprisonment Tuesday by Justice Jo-Ann Barlow at the Demerara High Court after he confessed to killing his 18-month-old niece Ronasha Pilgrim over a pair of gold earrings in 2017.

He will be eligible for parole after serving 20 years; Justice Barlow also ordered that Roberts is exposed to anger management and educational classes while in prison.

Roberts, formerly of ‘B’ Field Sophia, opted to plead guilty to the capital offence, which occurred on September 1, 2017, at Lot 98 North Sophia, Georgetown.

It is the State’s case that on the day in question, the toddler was at home with her two older brothers —ages 12 and 10 in their one-bedroom house, while their father worked the night shift as a security guard.

At around 03:00hrs, Roberts allegedly gained entry into the house by breaking a louvre window in the bedroom and attempted to relieve the toddler of her gold earrings. When the child began to scream, the man reportedly tossed her through a window into the swampy yard.

Before leaving, he placed a pile of wood on top of the shallow grave and buried the toddler alive. Her body was submerged in water and slush and was pulled from the three feet deep muddy grave approximately an hour after it was buried there.

In mitigation, Mckey told the court that his client is 18-years-old, but the court records presented by the Prosecutor showed that he is 22-year-old old.

The Attorney stated that Roberts showed remorse and in his statement to the Police by saying: “I sorry for what I do, I didn’t mean to do it! It is the devil in me.”

In court, Roberts explained that he was angry with himself and took it out on his niece.

Prosecutor Martin asked the court to consider the age of the victim, the way in which she was killed and her relationship with Roberts.

The Judge said that the incident was a “cruel fashion of death”, noting that Roberts did not only threw his niece through the window but also buried her in the mud.