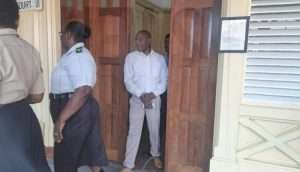 newsroom.gy- Joshua Franklin, a former cane cutter, confessed to the killing of his 55-year-old mother-in-law and nine-year-old stepdaughter whom he chopped to death at Tuschen Housing Scheme, East Bank Essequibo in 2014.

Franklin appeared before High Court Judge, Justice Sandil Kissoon where he pleaded guilty to the two manslaughter charges. He was initially charged with murder but opted to plead to the lesser count.

Prosecutor Gibbs told the court that on the day in question, Franklin invaded the mother-in-law’s house and attacked her and the little girl with a cutlass.

During the mayhem, Franklin had also chopped his reputed wife Geeta Boodhoo multiple times about the body, but she escaped and hid in the verandah of a neighbour’s house.

Boodhoo had also lost her left hand from the wrist down in that incident.  Franklin reportedly killed his reputed wife’s male friend Floyd Drakes during the chopping spree. This case will come up soon for report.

The case is adjourned until October 16, 2019, for probation report and sentencing.