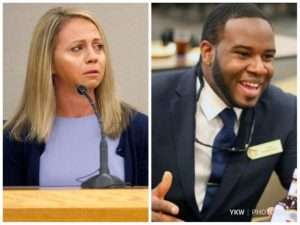 Cheers broke out in the hallway outside the courtroom after the ‘guilty’ verdict was announced.

Guyger, 31, fatally shot 26-year-old Botham Jean in his apartment last year and has said she mistook his apartment for her own and thought Jean was a burglar.

Guyger’s defense team urged the jury to think “coolly and calmly” about the case, which they cast as a tragic mistake. They have said Guyger made a “series of horrible mistakes” that led to her shooting Jean out of fear for her life.

But the prosecution said arguments of self-defense don’t apply to Guyger because Jean was not a threat. They said Guyger had other options besides killing Jean and that she acted unreasonably by failing to notice she wasn’t at her apartment.