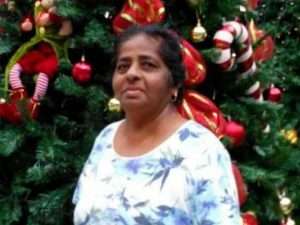 trinidadexpress.com – An ailing grandmother was knifed to death inside her home, and her disability allowance stolen.

The body of Chanday Lalloo, 64, was discovered this morning inside her home at King Street, Gasparillo.

The Express was told that she suffered a debilitating stroke five years ago, and walked with the aid of a stick.

Lalloo was last seen alive at around 6p.m. on Saturday when she walked out of her street to a Lotto booth to make a play whe bet.

At around 7.30a.m. today, family members called on her. There was no answer.

Someone looked through the window and saw the walking stick.

Believing she had fallen, relatives broke into the house. Lalloo was found dead with stab wounds to the neck, face and hands.

A pouch that contained her disability allowance, keys and other items was missing.

It is believed that the killer/s locked the door on the way out.

Royal Navy Task Group In Caribbean For The Hurricane Season

Royal Navy Task Group In Caribbean For The Hurricane Season