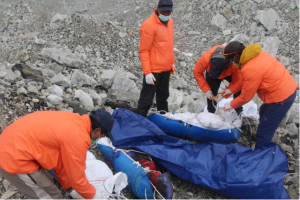 Mingma, around 20 at the time, knew that the route to the top was dotted with over 200 corpses. Climbers often used them as markers for distance and altitude. For example, he knew that when he saw “Green Boots”—the corpse of an Indian climber identified by the color of his neon-green footwear—he’d entered the “Death Zone,” which is 8,000 meters above sea level.

“I felt bad,” Mingma recalls of the experience of passing body after body, all frozen in a moment of tragedy. “I was crossing several people who were clearly in distress but couldn’t be rescued.”

In 2016, Mingma joined Anthony Gordon, an Australian TV producer who had conceptualized a documentary on the world’s first Sherpa rescue team (Sherpas are a Nepalese ethnic community who are employed as mountain guides). The seven-member team of sherpas was trained to operate cameras and the footage from their rescue missions was turned it into a documentary, Everest Air.

Mingma’s team rescued and retrieved bodies of 52 people from Everest and its neighbor Makalu, the fifth highest mountain in the world. But they weren’t just battling hostile terrain. There was the ever-present threat of man-made climate change. Only the previous year, unseasonably warm weather had caused an avalanche at the Khumbu glacier en route to Everest, killing 16 people.

“You can’t predict what could happen anymore,” says Mingma. “Sometimes, there’s too much snow [on the mountains], sometimes less.”

What that means is that dead bodies, some who’ve been lost for years, have started emerging from the ice. And along with the bodies, tons of garbage—cans, bottles, discarded climbing gear, and human waste—are defrosting along the route used by mountaineers over decades. Over 5,000 kilograms of that is human waste at the base camp.

In 2019, Everest saw its highest ever number of fatalities (12) after a traffic jam of climbers got stuck in a storm. This viral image captured the nearly 200 climbers stuck in a “traffic jam” at the peak. The Nepalese Government, which had issued a record 383 climbing permits for Everest, was panned for recklessly monetizing such a fragile ecosystem. But for a country whose per capita GDP is only USD $835—nearly 1/70th of the US—increased traffic on the mountain is in the national interest. Everest expeditions helped it earn Rs 442 million Nepalese rupees (nearly USD $4 million) this year alone.

It’s a Catch-22 situation, however. Many feel that the responsibility for cleaning up lies as much with the private stakeholders and civil society. Ang Tshering Sherpa, whose four generations of family have been living off leading Everest expeditions, says clean-ups aren’t just good for the environment, they also make business sense.

“If we have to grow the business, we have to be responsible for the environment,” says the 73-year-old.

“My great-grandfather used to lead expeditions since the 1920s. But the first big clean-up operation was done only in 1996 by Nepal Mountaineering Association. I was involved in it with around 40 other sherpas. We brought back around seven tons of garbage.”

This clean-up was privately funded and required thousands of dollars. With government-funded efforts not yet on the cards, such operations can only be replicated sporadically.

Since 2008, Ang Tshering’s travel agency, Asian Trekking Pvt Ltd, has dedicated 20 percent of its profits to annual clean-ups. The agency’s “Eco Expeditions” have since collected over 20.2 tons of garbage accumulated above Everest’s base camp. It also retrieved seven bodies from above 8400 meters. “To remove from such height isn’t easy,” adds Tshering. “The frozen body of an average person can weigh up to 160 kg [352 lbs] due to the ice around it. But the sherpas do it for the environment.”’

Goaded by several such volunteer efforts, the Nepalese government in 2014 introduced a rule that each trekking group is to deposit $4,000 before ascent. The deposit is refundable and processed after climbers return with 8 kilograms [17 lbs] of garbage each. To control the problem of human feces, they implore climbers to collect everything in bags and dispose it all after descent. Tshering Tenzing Sherpa, coordinator with the NGO Sagarmatha Pollution Control Committee (SPCC), says this has proven to be an effective measure.

Earlier this year, the SPCC was contracted by the government to lead a clean-up operation. In spring 2019, when the Everest trial was opened to mountaineers, a team of eight scoured the mountains and returned with 10.5 tons of garbage and seven bodies. Tshering Tenzing says he plans to continue the operations at least another five more years.

But despite of these efforts, there are still about 30 tons of trash left on the mountain, according to an estimate by the Everest Summiteers Association. Last month, the government banned the use of single-use plastic in the Everest region. To reduce the number of deaths, they are also planning to restrict permits to those who have climbed at least one 6,500 meter peak in Nepal before they attempt Everest.

For all such measures, the most effective solution is education, environmental awareness, and sustained effort, says Tshering Tenzing. “Everest is Nepal’s mother. We need to save her.”