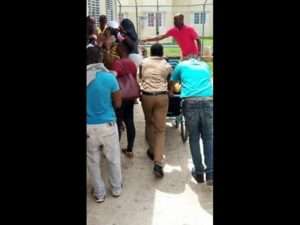 (JAMAICA STAR) — A male student went berserk during devotional exercise at Anchovy High School in St James last Friday and attacked members of the school population with a piece board, resulting in approximately 30 students being injured, one female student told THE STAR.

It is understood that the boy became enraged after he was ordered to come off a bus that he was taking to school by the conductor, who was reportedly fed up with his behaviour. The boy had to walk some distance to the Anchovy campus in Montpellier, and when he got there, all hell broke loose.

“All a wi inna devotion and wi did a sing, wen all a sudden mi si the pickney dem a scream and a run. Wen mi look, is the same boy mi see wid a piece a plank a lick everybody inna the devotion,” a student said.

“Some pickney get trample, some get lick wid the board, some faint, and some a dem run and hurt themself, after them a try fi jump over the stairs,” another student said.

One parent said that he was at work when he got a call informing him that his child was taken to the Cornwall Regional Hospital.

“When I came here, my daughter was almost unconscious, and I was shocked to hear what really took place,” the parent said.

“I want the school administration to know that this is not an issue to be covered up because that student could have been armed with a gun, or even a knife or a machete, and then we would have had 50 dead students on our hand, “ the concerned parent added.

Valentine Bailey, the People’s National Party councillor/caretaker for the Anchovy Division, said his son was one of the first persons who the young man attacked.

“Although he was not hurt, things could have turned out much more worse, and students could have been seriously injured,” stated Bailey.

“The school needs to take this incident seriously. I personally spoke to the principal but I did not get a full feedback about the issue,” he said. “ A child like this needs special attention.”

Repeated attempts to speak with the leadership of the school proved futile up to press time yesterday.