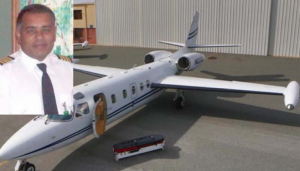 (Gainesville Sun) — A man who owned a charter airline and maintenance company based in Gainesville and serving Ocala was sentenced Friday to 13 years in federal prison for trafficking hundreds of kilos of cocaine into the New Jersey-New York area and laundering more than $10.2 million, federal officials announced.

From April 2011 through November 2014, Lall, a private pilot, smuggled hundreds of kilograms of cocaine from Guyana to New Jersey and New York on his privately-owned jet aircraft and then laundered the proceeds.

Lall owned a private jet charter business called Exec Jet Club based in Gainesville and used the proceeds of his cocaine empire to buy jet planes, houses and cars, the news release said.

He paid more than $2 million in cash stuffed into suitcases to a Florida contractor to build an airplane hangar in Guyana. Over a 3½-year period, Lall also made, or had others make, 1,287 cash deposits totalling roughly $7.5 million into more than 20 different bank accounts in New Jersey and New York, much of it in $20 bills. To avoid detection and skirt bank reporting laws, all 1,287 deposits were for amounts less than $10,000, federal officials said.