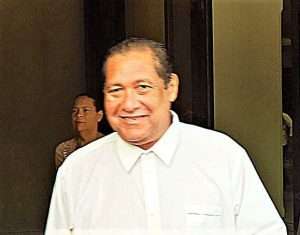 trinidadexpress.com- CONVICTED drug accused Stephen Gocking has been slapped with a 20-year prison term after being found guilty by a Port of Spain jury in July on two counts of cocaine possession for the purpose of trafficking.

The drugs were found concealed in orange juice tins, hidden in the kitchen of a house in Diego Martin that Gocking was occupying at the time and in a van he had previously borrowed from his wife.

That bust was made by police on the evening of August 14, 2001, during a raid at the apartment located on Franklyn Road, off Union Road, Diego Martin. In all, officers had found 206 juice tins containing 21.74 kilogrammes of the narcotic combined with acetone.

During the sentencing at the Hall of Justice in Port of Spain on Thursday, Justice Maria Wilson imposed a sentence of six years on Gocking on the first count, and a term of imprisonment of 20 years on the second. Both sentences are to run concurrently, meaning Gocking will serve just 20 years’ imprisonment minus the 73 days he had already spent in custody.

The judge said there was a clear legislative intent of Parliament since Section 5 of the Dangerous Drugs Act, stated that a person found guilty of such an offence could be fined up to $100,000 or where there is evidence of the street value of the drugs, they could be fined three times the amount together with 25 years’ imprisonment.

In this case, no evidence was presented as to the stret value of the cocaine.

Further to that, Justice Wilsdon said the court had to take into consideration the seriousness of the offence as well as its prevalence. A clear message needed to be sent to those contemplating committing similar offences that such acts would not be tolerated, said the judge.

Gocking is the cousin of Clint and Troy Gocking, who were fined $10 million for the illegal importation of two armoured Lincoln Navigator SUVs that were impounded by the State. He is also the nephew of Marlon Gocking, who was shot dead along Frederick Street, Port of Spain, in 2008.

In passing sentence, Justice Wilson said she was of the opinion that on the first count, the appropriate sentence was eight years’ imprisonment. However, this was reduced due to Gocking’s previously clean criminal record, the fact that he had not found himself in trouble with the law since his arrest in 2001 and his current health condition.

On the second count, she said the appropriate sentence was 25 years, but this was reduced to 20 also based on the previous factors.

During the trial, prosecutors Joy Balkaran and Shabana Shah presented evidence that on day in question, officers raided Gocking’s apartment at Franklyn Road and found 45 orange juice tins containing cocaine, as well as a solid block of cocaine in the kitchen. The total weight of that find was 4.71 kilogrammes.

The attorneys said officers also found 161 juice tins which also contained cocaine and acetone weighing 16.98 kilogrammes in the trunk of his wife’s SUV, which he was using at the time.

After the State had closed its case, Gocking testified in his defence, saying he had no knowledge of the drugs. He said the apartment at Franklyn Road belonged to his uncle, Marlon Gocking, and he had only gone there for “a romantic interlude” with a young woman outside his marriage.

Gocking testified that he had made arrangements with his uncle to utilise the apartment for just one hour since he could not carry the woman to the house he shared with his wife and mother at Powder Magazine, Cocorite.

“I went there purely for a romantic interlude,” he stated.

Gocking added that if all had gone well, the “romantic interlude” probably would have ended long before the hour was up. But his time with the woman lasted just as long as it took him to remove his shirt. Gocking said not more than five minutes after the woman arrived at the apartment, police barged in.

After entering the apartment, Gocking said the officers had their firearms pointed at him and were behaving in an aggressive manner.

The only thing that was going through his mind at the time, Gocking said, was what he was going to tell his wife.

He said when the officers first came to the apartment, he believed that his wife knew his intention for being at the location and “had sent some people for me”.

He was represented by criminal defence attorneys Larry Williams and Shaun Morris.