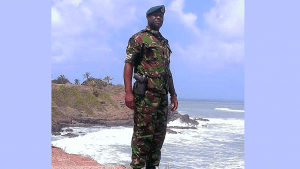 trinidadexpress.com- FOUR people, including a teenager, have now been charged with the murder of soldier Ken Palmer.

Palmer was at the home of his wife’s rela­tives at Dalloo Road, Gasparillo, in March 2018, when there was an altercation.

He was shot and died at the scene.

Two brothers last year faced the court for his murder.

On Wednesday, advice was received from Assistant Director of Public Prosecutions George Busby to also charge a teenager and his 22-year-old brother for Palmer’s death. They were both in custody after their arrest last week Tuesday in the Ste Madeleine area by Southern Division officers.

Investigations were supervised by Insp Darryl Coorie of the Homicide Bureau of Investigations, while the teen and his brother were charged yesterday by Corp Ian Bobb of the bureau.

Brandon faced eight other charges of wounding Ravi Pooran with intent, attempting to murder Palmer’s wife, shooting with intent against the couple’s nine-year-old son and seven-year-old daughter, possession of arms and ammunition, and having the items to endanger life.

Apart from the murder charge, Ravi, who was hospitalised following Palmer’s death, was also charged with possession of a firearm and ammunition, and having these items to endanger life.