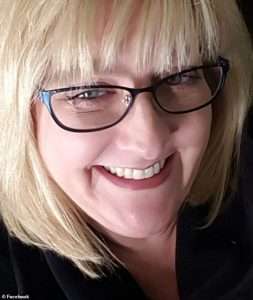 (DAILY MAIL) — A married high school teacher is accused of having sex with a 14-year-old boy at her home, in hotels and in her car, prosecutors claim.

Dayna Chidester, 51, from Illinois, was arrested by FBI agents after it was alleged she had sex with the minor ’15-20 times’ between September and December 2018.

Chidester, who worked as a consumer and family science at Reed-Custer High School, appeared at Dirksen U.S. Courthouse where prosecutors claimed she should be held without bond.

They argued she poses a flight risk and a danger to the community.

She had been freed on a $1 million bond on sex abuse charges filed in January which arising from the same investigation. However the state charges were dropped on Wednesday, the Chicago Tribune reports.

According to a criminal complaint filed Wednesday, Chidester texted another student at her school, saying she was disgusted by her actions with the boy, who did not attend the school.

In it she allegedly claimed: ‘It’s horrible. (I) can go to jail.’ She now also faces child pornography charges in addition to sexual abuse charges.

Officials in Will County became aware in December that Chidester was texting the student about her sexual relationship with the alleged victim.

There also over 9,000 text messages between the pair beginning in September 2018, according to the complaint.

The two also exchanged hundreds of phone calls over the same time frame.

In an interview on January 2, the alleged victim told investigators he had engaged in sex with Chidester ’15-20 times.’

He claimed the pair had exchanged sexually explicit photos of themselves, according to the complaint.

The FBI claimed they did not state if it was the same victim in both cases.

Chidester told Will County authorities in January that the two engaged in sexual activity twice a week, at her home, in her car and at hotels near west suburban Oak Brook, until late December 2018.

Officials allegedly interviewed the victim last month and asked him about a photo which Chidester allegedly took of him while the two were in her bedroom, the Chicago Sun-Times reports.

When he was asked why she would have taken the photo, he allegedly told cops: ‘She said I looked hot.’

A detention hearing for Friday afternoon and she will remain in custody until then, according to the Chicago Tribune.

The sexual abuse of a minor charge carries a mandatory minimum sentence of 15 years in federal prison if convicted.