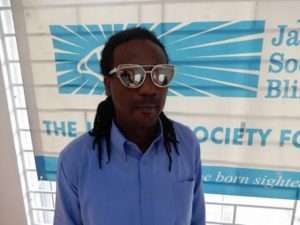 (JAMAICA STAR) — Coswell Barnett said that when he lost his sight at age three, it was a sad moment for his entire family. Barnett says his mother was one of the main reasons he was able to push forward.

“She was the driving force behind me…taking me to the hospital month after month, year after year, to get the much-needed help,” he said.

Today, Barrett, 35, is reading for a degree in liberal arts at the University of the West Indies. He already has a teaching diploma under his belt and has set his sight on a bachelor of arts.

These accomplishments, however, have a far cry from the reality he faced when he lost his sight in 1987.

His mother took a chance with the surgeries to help him restore his vision. Afterwards, he was able to see partially through his right eye and was able to go to school.

“I started attending Christiana Primary School in Manchester and because of such a late start, I had to spend two years in grade one to catch up.”

By grade three, he started attending Summerset All Age and Infant School in St. Andrew, after his family moved. Later, he lost all sight in his right eye.

“The one eye, that is the right eye that I could see from, not perfectly, the sight in it deteriorated, so between 1994 and 1995, I couldn’t attend any school.”

Thinking back, he says he remembers little from his younger years. “I remember a couple of things like colours and such.”

Barnett later attended Salvation Army School for the Blind and then Calabar High School. He then went on to Shortwood Teachers’ College and excelled. He studied Spanish for three years and was the first visually impaired student to attend the school.

“The experience there was wonderful…they made every effort to facilitate me,” he said. “I felt at home.”

He continued doing great things in 2006, as he started teaching at Clan Carthy High School, where he’s still working today. He says it’s been a wonderful experience, as he has been able to introduce initiatives to benefit students. These include taking students to the National Spanish Festival.

On Thursday, he was given a scholarship by the Jamaica Society for the Blind to further his studies.

With pride on his face, Barnett also has advice for youngsters facing similar challenges.