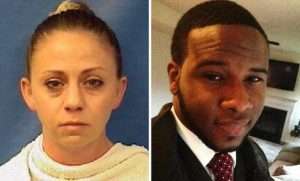 (CNN) — Amber Guyger, the off-duty Dallas police officer charged with killing a 26-year-old man in his own apartment, is expected to take the stand after the defense begins calling witnesses on Friday.

Now the question is when.

More than a year after fatally shooting Botham Jean, Guyger will testify to her version of what unfolded on September 6, 2018. The prosecution, which rested on Thursday, is expected to grill Guyger, possibly questioning her about her actions after she shot Jean.

Jean was on the couch in his shorts, watching TV and eating vanilla ice cream, when Guyger walked in and fired, Jason Hermus, a Dallas County prosecutor, told jurors this week.

Guyger has told police she mistakenly walked into the wrong apartment and thought she saw a burglar. Guyger lived in apartment 1378, one floor below Jean’s unit.

There were notable differences in the two apartments, prosecutors say

Guyger missed several signs indicating she was on the wrong floor and at the wrong apartment that night, prosecutors argue.

The prosecution on Thursday continued to question witnesses on the differences between Guyger’s and Jean’s apartments in an attempt to demonstrate that the former officer should have realized she was in the wrong unit before she opened fire.

Hermus put Dallas police Det. Stephen Cleary on the stand to explain several photos of the two apartments. Under questioning, he pointed out that Guyger’s apartment had a wooden board displaying photos hanging on the wall, a bookshelf in the corner and a small half-circle table with a vase of flowers against the wall.

The wall behind Guyger’s couch was bare, the photos showed.

Jean’s apartment had art on the wall behind the couch, an ottoman and rug in the living room and a workstation near the bar, Cleary testified.

Texas Ranger Michael Adcock testified that a 3D scan of Jean’s apartment showed that Guyger would’ve been able to see the couch Jean was sitting on, as well as the wall art.

The defense countered by pressing witnesses on the similarities in the hallways leading to their apartments.

This week, Texas Ranger David Armstrong testified that of the nearly 300 residents that investigators interviewed at the complex, nearly a quarter of those who lived in the third and floors had previously put their keys in the wrong door. Even more had parked on the wrong floor and walked to the wrong apartment.

Prosecutors have tried to show during testimony that Guyger did not follow department burglar protocol for a burglary call. Protocol dictates Guyger should have taken cover and called for backup, at least one of Guyger’s fellow officers testified.

But the defense argued since Guyger was off-duty and thought she was walking into her own home, she should not be held to that standard.

Guyger was fatigued after working 40 hours in four days and was on “autopilot” when she parked on the wrong floor in the garage where the floors are not clearly marked, defense attorney Robert Rogers said in opening statements on Monday.

As Guyger entered the apartment, she looked up and believed she saw an intruder about 30 feet from her in the dark, Rogers said.

The locking mechanism on Jean’s door was damaged, Armstrong testified, affecting the door’s ability to shut properly at times. Guyger’s defense team said that was one of the reasons she thought someone was burglarizing her home.

“I’m sure, he’s alarmed. But she’s thinking, ‘Oh my God. There’s an intruder in my apartment.’ And she’s face-to-face with him; she’s within 10 yards of him. And he starts approaching her,” Rogers said.

Guyger drew her gun, expecting the sight of the weapon would make him stop, and ordered him to show his hands, Rogers said.

“But he drowns her out and he’s yelling, ‘hey, hey.’ And he’s 25 feet and then he’s 20 feet, and it’s happening like this,” Rogers said, snapping his fingers.

Jean saw Guyger’s gun and “leans down and gets shot as he’s coming towards her and falls back,” Rogers said.

But Hermus told jurors the trajectory of the bullet suggests Jean was getting up from a chair when Guyger fired, or he was on his knees, trying to hide from her.

A police body camera showed in court showed Jean on the ground near the couch, with an indentation in the couch’s center cushion and a bowl of food on an ottoman in front of the cushion.

A Dallas County medical examiner testified he couldn’t say where either the shooter or where Jean were positioned, but agreed that Jean was likely bent over in some capacity because the bullet traveled in a downward trajectory.

It entered Jean’s chest above his left nipple and came to rest in a muscle in the abdominal cavity close to the spine, Dr. Chester Gwin testified.

Prosecutors have sought to show that Guyger was derelict in her efforts to save Jean after shooting him. Prosecutors pointed to a 911 call she made shortly before 10 p.m. in which she said 19 times she was in the wrong apartment.

“When you listen critically to what she is saying, you are going to hear that she is as concerned or more concerned about how this is going to affect her than this poor guy on the floor next to her,” Hermus said.

While she was on the phone with a 911 dispatcher, Guyger sent two text messages to her partner on the force, whom prosecutors said she was intimate with — one at 10:02 p.m. saying, “I need you … hurru,” and another a minute later saying, “I f***ed up,” according to the testimony.

Authorities recovered those text messages, but Guyger allegedly deleted other messages, Hermus said. Rather than texting her partner, Guyger should have devoted all of her attention to providing first aid to Jean, Hermus said.

Jean’s condition was “very faint” and he could be heard making grunting noises, the officer said.