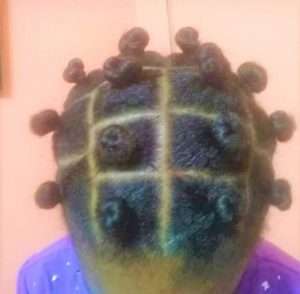 TRINIDAD NEWSDAY- The hairstyle of a 15-year-old schoolgirl may become the subject of court action as a mother of two is now contemplating a discrimination lawsuit against the principal and the school her daughter attends in Princes Town.

The woman, Leiselle Morton-Taylor, is claiming that for almost two years her daughter has been picked on because of certain natural hairstyles. However, school officials are claiming that the form five student has breached the school’s code of conduct by wearing particular hairstyles.

The mother said such hairstyles include Bantu knots, twists and sleek puffs. “These are the hairstyles I send my daughter to school with. They are always neat and appropriate for a school child.”

The frustrated mother said she has visited the school on numerous occasions after her daughter complains about what she is being told about her hair by school staff. The upset mother said last week Thursday was the final straw when the principal placed her hand in her daughter’s hair and said, “So your mother couldn’t comb your hair better than that?”

She took to social media to air her frustrations in a post along with photographs of her daughter’s hairstyles.

“They are saying my daughter did not abide by the dress code restrictions, but that is not true. There is nothing in the code that speaks about a child wearing Bantu knots, twists, cornrows or sleek puffs. There is nothing; so I need answers about why my child is being and continues to be treated this way because of her hairstyle.”

Morton-Taylor said after the principal placed her hands in her daughter’s hair last week, her daughter came home crying. “She told me, ‘Mummy I think I should press my hair up until I write exams and that way my hair would not be a problem.’ I could see the frustration in her eyes, it has been almost two years. She has grown weary. She is fed up.”

The woman said she told her daughter that she should always stand up for what is right and stay true to her identity. “Why should she make her hair straight to fit in and give in to social pressure? No, I will continue to fight for my daughter and probably all the little girls who feel they must wear their hair a certain way to fit in.”

Morton-Taylor said her daughter is an exemplary student. “She performs well academically, she represents the school in sport. She has even been described as a role model by one of her teachers. But apparently her problem is her hair. The hair she was born with.

“In 2019 children are being discriminated because of their hair. My daughter is not the only girl in the school being targeted, there are other students.”

She said when she posted the situation on Facebook, she realised there is also another school where young children are being targeted because of how they style their hair.

Morton-Taylor said last month she was also shocked to hear a dean at the school tell students during assembly that certain hairstyles they wear will only attract “badman.”

“These hairstyles she was referring to were the same hairstyles I comb my daughter’s hair.”

The dress code restrictions state that students “do not have the right” to wear gel hairstyles or elevated hairstyles, dyed or sculpted hair, and long or dangling hairpieces or extensions. The code also states that hair accessories in colours other than the green colour approved by the school, are forbidden.

An official of the education ministry told Newsday that the ministry was aware of the matter which is now being investigated by the education district.

The official said the ministry had guidelines in the school code of conduct that relates to the dress code of students.

The code, which is found on the ministry’s website, advises that “students should wear school uniforms and their grooming should be modest, clean and consistent with healthy, sanitary and safety practices.”

It also says, “Students presenting a bodily appearance or wearing clothing which is disruptive, provocative, revealing, profane, vulgar, offensive, obscene or which endangers the health or safety of the students or others is prohibited. Failure to wear the prescribed school uniform and to be appropriately groomed as set out by the individual school rules is a violation of the National School Code of Conduct and will warrant the appropriate consequence.”