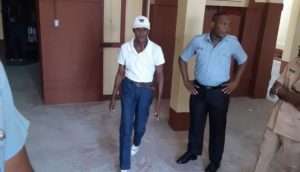 newsroom.gy- A 55-year-old man was on Monday appeared before Chief Magistrate Ann McLennan to answer to a charge of engaging in sexual activity with a four-year-old girl by bracing her to a gate and rubbing his body against her.

John Fitzgerald Hopkinson of Kitty, Georgetown was not required to plead to the charge. Police said he committed the act on April 26, 2019, at Queen Street, Kitty.

The Chief Magistrate ordered that Hopkinson be mentally evaluated to see if he is fit to stand trial.