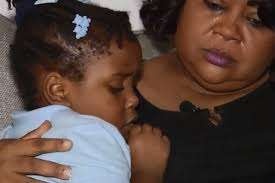 nypost.com- A Florida police officer who arrested two children — including a 6-year-old girl for throwing a tantrum — has been suspended as his department investigates the shocking incidents, authorities said.

Department policy requires the officer to get approval for the arrest.

The cop has been reassigned to the Reserve Officer Program and his duties suspended, pending the outcome of an internal investigation, Rolon said.

“The Orlando Police Department has a policy that addresses the arrest of a minor, and our initial finding shows the policy was not followed,” Rolon told the outlet.

“As a grandparent of three children less than 11 years old, this is very concerning to me,” he added.

The 6-year-old, Kaia Rolle, was cuffed, fingerprinted and charged with battery after throwing a tantrum and kicking someone at the Lucious and Emma Nixon Academy elementary school, her grandmother, Meralyn Kirkland, said.

Kirkland said the child suffers from sleep apnea and was sleep deprived at the time of the outburst.

“No six-year-old child should be able to tell somebody that they had handcuffs on them and they were riding in the back of a police car and taken to a juvenile center to be fingerprinted, mug shot,” Kirkland said.

When a supervisor learned about Turner’s actions, the arrest was halted and the child returned to school, before she was processed, Rolon said.

The 8-year-old, arrested by Turner in a separate incident, was processed at the Juvenile Detention Center and later released to a relative.

No additional information was immediately available about that incident.