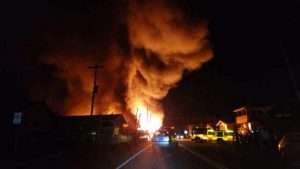 newsroom.gy- The two Chinese nationals whose burnt bodies were discovered in the debris in the aftermath of a massive fire early Sunday at Vreed-en-hoop, West Coast Demerara have been identified as a husband and wife.

The wife, 45-year-old Zhongqing Qiu and her husband Jianqing Qiu, 53, came to Guyana from Fujian province and only set up the supermarket a few months ago. It is believed that they resided inside the supermarket.

The News Room understands that because the power went out with the fire, the couple was unable to escape because the lone door to the front operated electronically.

Fire Chief Marlon Gentle told the News Room Monday that the fire was possibly caused by a defective freezer that was used to store meat in the supermarket.

The fire started at around 01:50hrs Sunday. According to reports, the owners for the supermarket attempted to fix the freezer by hooking it up to a transformer and it is believed that the transformer failed and caused the fire.

Residents claimed that while fire fighters promptly responded to the scene, they did not have enough water and this caused the fire to spread.

Omar Rayman a relative to the owner of the one of the businesses said in a social media post that the family lost a landmark piece of its history. The 83-year-old owner, Faizal Rayman escaped the building with help from a live-in helper.

“The Big House as it was apparently known, where my grandfather was born and had his funeral held, was lost in a fire. My great uncle Faizal safely escaped the building, tragically two people in another building perished as a result of the fire,” Rayman stated.