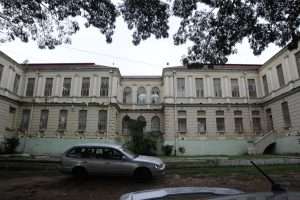 trinidadexpress.com- A PORT of Spain man who claims to be Jesus Christ and has the abili­ty to see into the future is suing his family and one of this country’s most prominent psychiatrists, claiming they conspired together to have him admitted to the St Ann’s Psychiatric Hospital in 2016.

The lawsuit was brought by Josh Singh, whose contention is that he was placed in the mental institution by his family and stayed there for seven days, in an attempt by them to deprive him of property his father had left behind.

Singh filed the lawsuit against his mother, two sisters, brother and Dr Ian Hypolite, former director at the St Ann’s Hospital and current lecturer at The University of the West Indies.

The case had started before Justice Davindra Rampersad in July, with Singh taking to the witness box. It recommenced before the judge at the Hall of Justice in Port of Spain yesterday, during which Hypolite and Singh’s mother, Lystra Singh, testified.

In his testimony, Singh said he did not have any mental issues and at the time, he was on a spiritual journey to “find himself”. Singh had testified that he was the Messiah.

That journey had begun in late 2013 after he met a man who began teaching him about the spiritual life. During his quest, Singh left his job as an information technology technician in 2015 and soon after that, his wife separated from him, taking their two children along with her.

He eventually moved back into his family’s home on Park Avenue, Port of Spain.