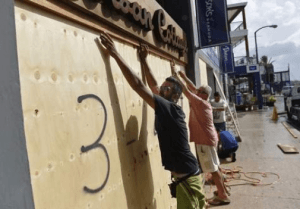 AP — Hurricane Humberto blew off rooftops, toppled trees and knocked out power as it blew past the British Atlantic island of Bermuda. But officials said Thursday that the Category 3 storm caused no reported deaths.

“We’ve made it through and everyone is safe,” Premier David Burt said. “That’s what is most important.”

Security Minister Wayne Caines said schools and government offices would remain closed and he asked people to stay off roads while emergency crews clear them and remove power lines damaged by the hurricane, which had winds of about 120 mph (195 kph) at its nearest approach the Bermuda Wednesday night.

He said Thursday that 28,000 customers on the island of 70,000 people remained without power in the morning.

The storm was centred about 250 miles (400 kilometres) north-northeast of Bermuda and moving to the east-northeast at a brisk 22 mph (35 kph).

Meanwhile, newly formed Hurricane Lorena was perched right on the coast of southern Mexico, threatening to cause flooding along in an area that has been suffering unusually dry weather.

The storm had maximum sustained winds of 75 mph (120 kph) Thursday morning and it was centred about 25 miles (40 kilometres) southeast of Cabo Corrientes, which juts into the Pacific below Puerto Vallarta. It was moving to the north-northwest at 8 mph (13 kph).

The forecast track showed the storm nearing the Los Cabos resort area at the southern end of the Baja California Peninsula Friday night and Saturday.

Forecasters said the storm could bring 5 to 10 inches (12.5 to 25 centimetres) of rain to parts of the region and Mexican officials voiced concern that some parts of southern Mexico, which have seen a lack of rainfall, could suffer dangerous flash floods and landslides unleashed by torrential rain.

In parts of Colima, Jalisco and Michoacan states, “it is forecast that the total accumulations of rain could … represent 40 per cent of the rain for an entire year in that part of the country,” said Blanca Jiménez Cisneros, director-general of Mexico’s National Water Commission.

Classes were suspended in Colima as a precaution.

In Texas and Louisiana, the remains of Tropical Depression Imelda kept bringing rains and flooding. Forecasters warned that Imelda could bring up to 35 inches (90 centimetres) of rain this week in some areas of Texas through Friday.

In the Texas town of Winnie, about 60 miles (95 kilometres) east of Houston, a hospital was evacuated and water was inundating several homes and businesses.

Elsewhere in the Atlantic region, Tropical Storm Jerry strengthened to top winds of 70 mph (110 kph) on its way to becoming a hurricane.

The outermost Caribbean islands were already on a tropical storm watch Thursday morning as the storm approached. The hurricane centre said Jerry could be near the northern Leeward Islands on Friday and pass north of Puerto Rico on Saturday.