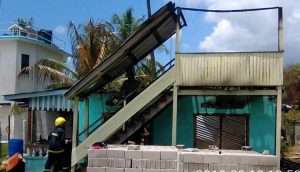 newsroom.gy- An 85-year-old man met an untimely and fiery death Wednesday morning after he was unable to get out of his burning house.

The man has been identified as Stanley Brown of Lot 85 Scottsburg, Corriverton, Berbice. His wife, Movett Brown, 77, jumped to safety from a window on the second flat of the building.

The fire reportedly started at approximately 05:30hrs and quickly spread throughout the upper flat.

The couple’s daughter, who occupied the bottom flat with her husband and two children, had minutes earlier left for an early morning trip.

Her 18-year-old son, Tyrese Smith, was awakened to the screams of his grandparents.

He said it was until he ran out of the house that he noticed the flames and smoke coming from the upper flat. Efforts were made to rescue the grandparents but the fire began to spread, making it difficult to break through the heavily- grilled windows.

The door was also locked from the inside.  Smith related that there was one window that was not grilled, so his grandmother jumped out of that one.

While efforts were made to extinguish the blaze, it was unsuccessful.

The fire service subsequently responded to the scene where they managed to control the blaze and also removed the remains of the man.

An investigation is ongoing.