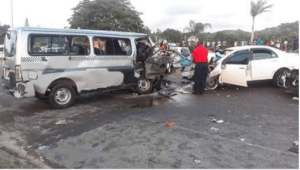 jamaicaobserver.com- A three-vehicle collision on a section of the elegant corridor which runs through Flanker left two drivers dead and about 15 students injured yesterday afternoon.

The identities of the deceased were not ascertained at press time.

According to a reliable Jamaica Observer source, the crash occurred about 4:00 pm when the driver of a Toyota Corolla motor car, travelling towards Montego Bay, lost control of the vehicle after a tyre reportedly blew out just after passing a traffic light at Flanker.

The car reportedly jumped the median and slammed into a Nissan Caravan minibus transporting about 15 students, which was travelling in the opposite direction.

A Nissan AD Wagon, which was reportedly driving behind the minibus, with five young students on board, slammed into the minibus.

The drivers of the minibus and the Toyota Corolla, who were taken to Cornwall Regional Hospital, were subsequently pronounced dead. The children were also taken to the hospital, a number of them reportedly in critical condition.

Firefighters, who were quick on the scene with other emergency personnel, including the police, had to cut the driver from the mangled remains of the Toyota Corolla.

The injuries sustained by those travelling in the AD wagon were reportedly minor.

The crash caused a traffic snarl as the side of the road where it occurred was blocked off to facilitate the crash reconstruction team, firefighters and other emergency personnel.

The Traffic Department of the St James Police Division is investigating.

Yesterday’s deaths came after the Road Safety Unit had earlier reported that 307 people have been killed due to traffic crashes since the start of the year.

According to the unit, vulnerable road users such as motorcyclists, pedestrians, pedal cyclists and pillions accounted for 64 per cent of the fatalities.

“Fatalities for 2019 are projected to increase by three per cent when compared with 2018,” the Road Safety Unit said as it appealed to motorists to reduce their speed and exercise caution on the roads.