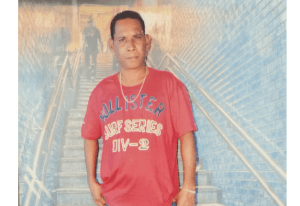 newsroom.gy- The community of Enterprise on the East Coast of Demerara is left in a state of shock after a 47-year-old painter was killed by his brother, Roopchand Jattan, a carpenter on Monday.

The family of the brothers is still coming to grips with what happened.

Their mother, 69-year-old Dassi Samaroo told the News Room Tuesday that she was never aware of any issues between her sons. She said they grew up very close and would oftentimes work together.

The mother said that the brothers were imbibing at her Lot 417 Charlotte Street, Enterprise home at around 15:00hrs after working for the past two weeks.

She heard them arguing and so she decided to intervene to quell the situation and went back to cook. The argument stopped but a few minutes later, the mother of seven said she saw Navin holding his abdomen and subsequently fell to the ground. He was reportedly stabbed.

“Me can’t really tell you what happen, cause me nah went at the scene to say what happen…but when me come he [Navin] done fall down; when me check he belly me see he get bore,” the mother said.

The mother explained that she applied pressure to the wound and sprinkled water on his face but Navin did not respond and so she cried out for neighbours to help.

The mother claimed she did not see the murder weapon.

Navin is the first of seven children to die; he has been painting since the age of 20.

“He was quiet, anybody he can help do anything…he very gentle,” the grieving woman said.

Police Headquarters said he was taken to CC Nicholson Hospital in Nabaclis where he was pronounced dead on arrival.

The suspect, his brother, is in Police custody assisting with the investigation.