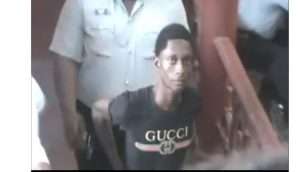 newsroom.gy- Twenty-year-old Julian Corlette was on Wednesday sentenced to two years imprisonment by City Magistrate Faith McGusty after he confessed to robbing a woman because he was “frustrated ” and needed money.

The unrepresented man told the court that he was frustrated since he was not finding a job and needed money for his family.

Corlette told the court that on the day in question he stripped off his clothes, laid on the ground and prayed because he was hungry and tired.

It was that moment, Corlette explained, he saw the victim and decided to snatch her handbag.

Police Prosecutor Annalisa Brummel told the court that on the day in question, the victim was at Light Street when Corlette walked up to her and snatched her handbag.

The woman held on to her handbag, which caused Corlette to become annoyed and he dealt her several cuffs to the face.

The woman let go of the bag and Corlette escaped. The woman alerted a passing security van, which then gave chase. The defendant was apprehended in Alberttown with the handbag in his possession.

He was handed over to the Police and was positively identified by the victim.