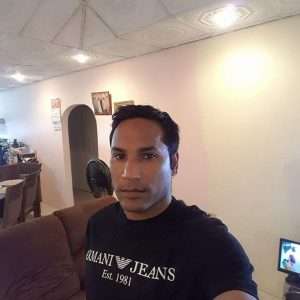 trinidadexpress.com- NARESH Basant was trying to earn an honest living when he was gunned down by criminals in Carapichaima on Tuesday night.

Basant was shot multiple times by the killer/s who pulled alongside his vehicle at Korea Village and opened fire.

Basant, also known as “Venesh” was a father of one, of Charlieville, who worked as a welder and fabricator.

He had gone to the area about a job at Jagbir Street when he was attacked around 7.45 p.m.

He spoke to someone about the job and was returning to his vehicle.

Police were told that the Basant saw a white Nissan Tiida approaching, with one of the occupants pointing a firearm at him.

Thinking it was a robbery, Basant took his gold chain to hand over, police were told.

Instead the occupants of the vehicle opened fire and shot Basant multiple times.

Basant collapsed and died next to his car, with the gold chain still in his hand, and his wallet on him.

Police were told that the white Tiida had been circling the area before Basant pulled into the street.

His relatives have expressed shock and confusion over the killing.

They said that Basant was a distant relative of Rachael Sukhdeo, the wife of slain millionaire auto and real estate dealer Sheron Sukhdeo.

Basant’s relatives said that he worked hard to earn an honest living for his family.

“I wish to express my condolences to the family of Naresh Basant on their loss. I understand what you are going through at this time. I would like to however express my disgust for printing erroneous links, for the millionth time before confirming the truthfulness of the information. The deceased is not my cousin”, Rachael Sukhdeo posted.

An autopsy is expected to be done on Wednesday at the Forensic Science Centre, St James.