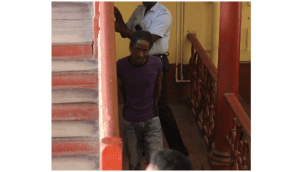 30-year-old Leon Murray was on Monday remanded to prison for pelting his ex-lover with a brick and fracturing his nose and damaging his spectacle.

Murray appeared before Magistrate Faith McGusty and pleaded guilty to the charge. Police claimed that he committed the act on September 5, 2019, inflicting grievous bodily harm on Shawn Solomon.

“I guilty cause I shy he with a brick,” the unrepresented man told the court.

He was also charged for damaging Solomon’s spectacles, valued $30,000, on the same day in question. He denied this charge.

Murray told the court that he and Solomon shared a relationship but it ended and he had started dating a woman.

He claimed that Solomon attacked him with knives and he defended himself.

According to the Police prosecutor, on the day in question Solomon had returned home to find Murray and the two of them ended up in a heated argument.

During the argument, Murray armed himself with a brick and pelted Solomon to his face, resulting in him sustaining a fractured nose

Magistrate McGusty remanded Murray to prison since the victim opted to receive compensation.

However, Murray did not have the money and this caused the Magistrate to adjourn the matter until September 10, 2019.