Guyana: 7-Year-Old Dies After Sustaining Burns To Almost 100% Of Her Body 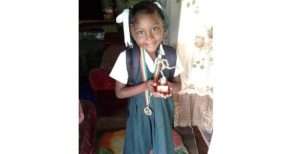 NEWS ROOM GUYANA- Almost a month after being burnt to almost 100% of her body, seven-year-old Shaniya Persaud died at the Shriners Hospital, Galveston Texas in the United States Sunday evening where she was battling for her life.

The Rotary Club of Demerara which greatly assisted in her evacuation to the United States for speciality treatment announced that Shaniya “fought very hard and survived for much longer than expected but her internal and external injuries were sadly too extreme to heal.”

Her bravery was inspiring to us all,” the Club in a social media post.

On Saturday, the News Room reported that the Saving Hands Emergency Aid (SHEA) Organisation stated that Shaniya had one of her legs, a few of her fingers and a section of her ear amputated Friday night.

“Shaniya has been fighting an uphill battle and despite her doctor’s incredible efforts to treat her extensive injuries, her wounds are not healing,” the Organisation had stated.

The Organisation had said that doctors are trying everything possible to treat the little girl, but she also has internal injuries that are difficult to treat.

“The doctors have given poor prognosis for recovery.”

Shaniya received second and third-degree burns to approximately 97.8% of her body when her North Mon Repos, East Coast Demerara house went up in flames at around 01:00hrs on August 5, while she was asleep.

The Rotary Club of Demerara in collaboration with SHEA successfully raised US$42,000 to evacuate her to the U.S hospital for treatment.

Shaniya was medivac from the Georgetown Public Hospital on August 10 to the Cheddi Jagan International airport where she boarded a chartered flight to the U.S.

The brave little girl walked out of her burning house with her skin almost burnt off and her feet bleeding with cuts.