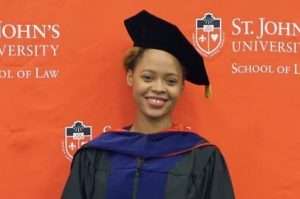 antiguaobserver.com- Taitu Goodwin, daughter of Antigua and Barbuda’s former Ambassador to Cuba, Bruce Goodwin, has lost her life as a result of an alleged domestic dispute.

On Sunday, Taitu Goodwin was stabbed and killed in her apartment in Anguilla, allegedly by her ex-boyfriend.

Her father, who is also a founding member of the Democratic National Alliance (DNA), was completely distraught while in conversation with OBSERVER media, and explained that he and his family are shattered by the news.

He further disclosed that his 27-year-old daughter was allegedly being harassed by her ex-boyfriend and he somehow got into her apartment where he brutally murdered her with a knife.

Other unconfirmed reports state that the alleged perpetrator attempted to bury her body in sand around 4:00 a.m. on Sunday.

Taitu Goodwin is an Antiguan by birth, and a recent LLM graduate of Lyon Catholic University and St. John’s University. She was reportedly well versed in international commercial law and regulations.

Just a few months ago, she completed her studies and began her practice as a trade and investment officer with the government of Anguilla in the Ministry of Finance.

Meanwhile, Baldwin ‘Spliff’ Anthony, another father who not long ago also lost his daughter as a result of an alleged violent domestic incident, is extending condolences to Bruce Goodwin.

Anthony experienced a similar heartbreaking tragedy when his daughter, Carissa Chandler, was fatally shot in late May of this year allegedly by her live-in boyfriend, Tedson Knowles.

“I would like to tell Bruce that he has got to be strong; trust the Most High, and try not to be all by yourself. Have good friends, communicate with them, cry whenever you feel like crying because it will assist you. Give thanks and praise. Let her memory live with you. Those are the things that are going to carry you forward, but it’s going to be a very tough road for Bruce. Bruce I just want to wish you all the best. It’s going to be a very bumpy road,” Anthony said.

Chandler was 29-years-old when she was allegedly killed by Knowles following heated arguments that turned violent at the New Winthorpes home they shared.