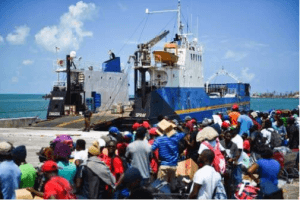 (AFP) — The Baptiste family steps off the ferry that brought them from Marsh Harbour, the port in The Bahamas that was flattened by Hurricane Dorian.

“Plenty people dead,” says Marie Claude Baptiste, the 46-year-old mother, in broken English. She does not say where she is from, though the area she has fled was home to many Haitian immigrants.

“Plenty people — maybe 400 people,” she says with tears in her eyes and a cellphone clutched in her hand, the only possession she has left after the hurricane.

The horror of the memory makes it hard for her to marshal her thoughts: she has no idea where she will go now that she has reached the relative safety of the Bahamian capital Nassau. Maybe Florida. Canada is another possibility.

But for now, all she wants is to get her family on board a bus that will take them to a shelter.

Normally, hurricanes blow through The Bahamas in a matter of hours. But Dorian stalled for three days over the northern edge of the archipelago, grinding down buildings and infrastructure on Grand Bahama and Abaco, leaving only rubble and 70,000 people without a roof over their heads when it finally moved last week Tuesday.

The death toll for now stands at 45, but is expected to rise dramatically as the authorities sift through the debris.

It is becoming increasingly clear that The Bahamas will have to rebuild entire towns from scratch. The work will take years, raising the question of where to put the tens of thousands of Bahamians left homeless by the monster storm.

For now, the stunned survivors are arriving in Nassau in dribs and drabs, by air and by sea. The ferry that brought the Baptiste family makes two trips a day, carrying between 100 and 200 people per trip. At the dock, they are handed free cellphones — the only way they can contact family members who have been separated.

Prime Minister Hubert Minnis warned last Friday that the capital could not just take in the entire population of Abaco island, where Marsh Harbour is located, from one day to the next. Instead, the Government plans to set up shelters in areas that were hit by the storm.

The National Emergency Management Agency (NEMA) said in a statement that 2,500 people had been evacuated from the islands since the hurricane hit, most of them from Abaco.

Three hundred and seventy have found refuge in a shelter set up in Kendal Isaacs school, where another 300 people were due to be sent yesterday.

Three other shelters set up in Nassau were already filled to capacity by Sunday, NEMA said.

The Government is also considering setting up “mass shelters” using tents and shipping containers. And it is asking residents of Nassau — which was spared the full impact of the storm — to accommodate the refugees.

That is what Abria Hield is doing. An employee of the foreign ministry, she was at the dock late Sunday, waiting for one of her cousins from Marsh Harbour to arrive.

Before the storm, she lived alone in a two-bedroom apartment: she now shares it with 10 other relatives.

She admitted her place was cramped, but said she was buying airbeds to accommodate everyone. “We gotta make it work. It’s going to be tough, but it’s family,” she said.

Senators from Florida, the closest US state to the islands, are asking President Donald Trump to grant Temporary Protected Status to The Bahamas, a short-term permission to reside in the US that has, in the past, helped people from Haiti, El Salvador and Honduras, but which Trump has been trying to roll back.

In the meantime, Bahamians will have to rely on each other to get through the aftermath of the devastating hurricane.

“And we don’t know for how long it’s gonna be,” she added.