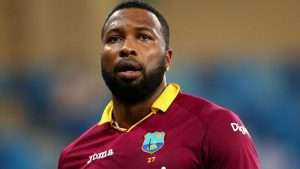 sportsmax.tv- Windies batsman Kieron Pollard is poised to become the new captain of the regional team in both the T20 and ODI formats, numerous reports have claimed.

The 32-year-old Pollard, long thought of as a viable alternative for the post, is set to replace Jason Holder as head of the ODI team and Carlos Brathwaite as skipper of the T20 squad.  Holder was appointed the head of the regional team in 2014, with Brathwaite appointed as leader in the shorter format in 2016 after an outstanding performance at the World Cup.

Neither captain has performed particularly well, however, with Holder losing 24 of 54 matches played and Brathwaite managing just a 33 percent win ratio.

Pollard has, however, not been a regular participant for the Windies squad in recent years, particularly in the ODI format where he last appeared for the team in 2016.  The player had, however, been named as a reserve for the 2019 World Cup but failed to make an appearance, as the regional team managed just one win and an eighth-place finish.

Pollard made his T20 debut on June 2008 against Australia but was overlooked for several years after disputes with the regional board. He was, however, re­called to the West Indies team for the T20 internationals against Indian last month.