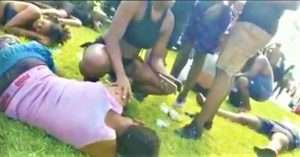 trinidadexpress.com -“Zesser pills” currently growing in popularity as a “party drug” could cost you your life.

This is the warning being given by anti-substance abuse activist Garth St Clair.

St Clair issued the warning in response to a video circulating on social media, showing a number of people seemingly passed out outside the Hasely Crawford Stadium in Port of Spain after a recent party.

The 16-second clip shows several men and women lying motionless on the ground while an ambulance is on the scene rendering assistance. A woman could be seen trying to shake an unconscious man awake.

The accompanying caption said the people consumed “zesser pills”. Last week, Asst Supt of Po­lice for the Central Division Wayne Mystar advised people to stay away from the dangerous drug.

However, St Clair said the drug, which the Express learned sells for $100 per pill, is gaining popularity on the party scene.

The zesser pill, police said, is a combination of ecstasy and cocaine. Both drugs are dangerous when used alone, but combined they pose an even greater risk.

People use the drug for the euphoric “high” it produces, but the drug can result in heart attack, paranoia, strokes, seizures, coma and even death.

St Clair said the drug takes a long time to leave the system, prolonging the effects. It is even more potent when combined with alcohol.