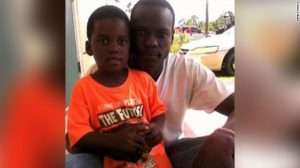 CNN- Adrian Farrington struggled to keep his 5-year-old son afloat after Hurricane Dorian hit their home on Abaco Island in northwestern Bahamas. They clung to each other, surrounded by surging waves and floating piles of debris.

After an hour of wading in the water with his fractured leg, Farrington, 38, told the Nassau Guardian he grabbed his son and put him on top of a roof to protect him from flooding and the dangers lurking in the water. He implored the boy to close his mouth, stop crying and keep breathing, he said.
But before he could climb up to join Adrian Farrington Jr., a gust from the hurricane dragged the boy into the surge. That was the last time he saw him, he said.
“I still could remember him reaching for me and calling me, ‘Daddy,”” the grieving father told the paper at the local hospital in the capital of Nassau, where he’s getting treatment for broken bones.

He jumped underwater to save his son

As soon as the surge took his son, Farrington pushed through debris and rushed to the other side of the roof, where Adrian had vanished into the murky waters. He dove underwater and reached in with his hands, hoping to feel his skin or clothes, he told the paper.
“I ain’t find nothing. I come back up. I hold my breath and I gone back down again,” he said. ” All this time, people carried my wife to safety and they calling me, but I ain’t want to go because I didn’t want to leave my son.”
After a weary search that yielded no signs of the boy, he moved to higher ground. He said he hopes his son is found alive but fears the worst.
“What I saw when I lose him, anything could happen,” he told the paper. “A 5-year-old in that type of search, they don’t stand much a chance.”
Rescue crews are scouring the waters searching for survivors after one of the most intense storms to hit the Caribbean flattened homes and washed away neighborhoods, killing at least 30 people in the Bahamas.
Officials in the Bahamas gave a sobering outlook Thursday, bringing in body bags and coolers as hundreds remain missing. Additional morticians are also going to Abaco and other affected areas, Health Minister Dr. Duane Sands said.