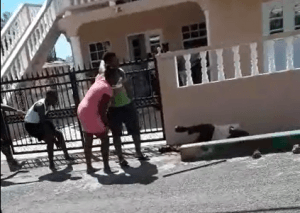 A 16-year-old of Waltham, St.Mark, was arrested and formally charged with attempted non-capital murder following a chopping incident which occurred on September 2nd, the first day of the school term. The accused is charged that he attempted to cause the death of Akim Ambrose, a 16-year-old student of Bonair St. Mark when he inflicted a chop wound to his upper body.

In a now-viral video posted on social media, the two involved in the altercation were seen in a heated argument which then became physical.

Students who witnessed the incident ran to the aid of Ambrose when he fell to the ground after he was injured.

The entire incident happened in the full view of a group of uniformed school children.

The incident, which happened on the public road, is being investigated by police.

This update clarifies the status of the charge.